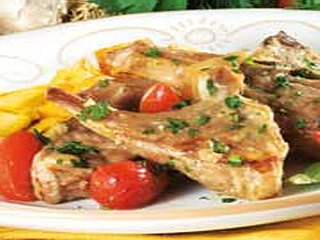 brown a sliced onion in butter, add a rabbit cut in pieces and dipped in flour.
Salt it and fry at medium heat. Add Vernaccia di San Gimignano, broth and cook it slowly. 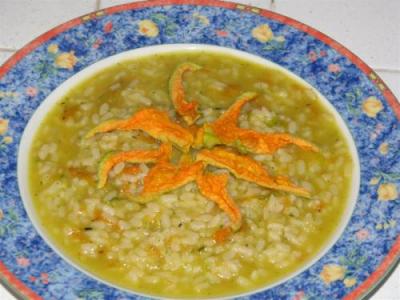 Brown an onion in butter, add 150 gr. of zucchini flowers cut into small strips.
Then add rice, toast it adding a glass of a dry white wine like 'Vernaccia di San Gimignano' melt in some broth a few saffron stigmas, cook the rice with the broth. Season the risotto, off the heat, with butter and parmesan cheese.

cut a Kg of red onions in thin slices and brown them in extra-virgin olive oil with half a glass of water. Let them cook slowly for half an hour, then add salt, pepper and broth and cook for an other hour.
Pour the carabaccia in bowls over toasted bread and sprinkle with abundant parmesan cheese.

Wet and squeeze 400 gr. of stale bread to reduce it to crumbs.
Add 4 sun-ripe sliced tomatoes, 2 sliced fresh onions and some basil leaves.
Season it with salt, extra-virgin olive oil and a drop of vinegar. Serve it fresh.

Brown 2 medium onions thinly chopped in oil, add 500 g. of veal fillet and brown it on the surface, season it with salt and pepper, add a glass of Vernaccia di San Gimignano, cook adding some broth. Add and mix 2 spoons of long-life cream and saffron's stigmas. Slice and serve with its sauce.

Stewed pears with saffron and chocolate mousse (for 4 people)

Cook 4 peeled pears with 1 litre of water, 250 g. of sugar, 1 stick of vanilla and Saffron's stigmas. Leave the pears in their water until they get cold. Heat 250 g. of long-life cream with 250 g. of plain chocolate until the chocolate is melted. Then add 250 g. of whipped cream and leave it in the fridge until it gets cold.  Cut pears in two, take the core away, put the pears on plates with chocolate mousse. Sprinkle pears with some of their sauce.